My husband and I started brainstorming our weekly household needs and while he worked on meal planning and a grocery list, I opened the Target app on my phone to see if they had any amazing deals on things we needed. We all know a trip to Target is dangerous and needs to be carefully and cautiously plotted.

Otherwise, the money can disappear.

I immediately found myself drawn to this luscious teal blue chair. 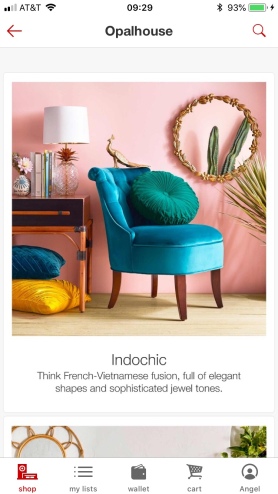 I mean, I seriously see this chair as part of the renovations to our master bedroom here.

But then I read the description: “Indochic: Think French-Vietnamese fusion, full of elegant shapes and sophisticated jewel tones.”

Now, this is my version of when people cry sexism when parents put little girls in clothes that focus on cuteness or certain traits our society sees as feminine. Like the t-shirts that say “I’m too pretty to do homework” or something like that.

“Indochic” is the exploitation and the ignorant perpetuation of the stereotypes that allowed colonialism and the “civilizing mission” to destroy cultures. If you understand my outrage… Well, may the sun shine upon you. We are kindred spirits. If not, let me see if I can calm down and rationally explain the root of my indignation.

First, let me start with the term “Indochic.” It’s a play off of the term “Indochina,” a strongly European word describing the region between India and China. The term became prevalently used in the 19th century and eventually referred strictly to the French colony of what is now Vietnam.

The French called its colony in the region “Indochine” so already Target has managed to make a playful pun, and a French pun at that by combining the French term “chic” with the prefix “Indo.” It’s Indo-great! Indo-cool!

Now, let me rant about the idea of “French-Vietnamese fusion.” The mix of French and Asian style occurred when the French colonized this region. I am no expert on French colonization in Asia, so I can’t address this in depth. But let me offer a few ideas.

Any fusion between the French and the Vietnamese was not voluntary. So should we celebrate it?

Is a pun like “Indochic” okay because the reference dates to the late nineteenth through mid-twentieth century? Is it a forgotten pain? Can it be compared to referring as certain styles as “urban” as opposed to African-American? Would people feel differently about this type of style if the ad featured an Asian woman and a French man?

What I also find interesting about the concept of Indochic, French-Vietnamese fusion connects to my interest in miscegenation. The French developed strict plans for breeding between the civilized French man and the indigenous woman. In French Indochina, French men in the colony were encouraged to make local women their concubines specifically to purify and civilize by producing children with Frenchness.

But remember, the women in these unions would come from poverty by French standards and would be servants or laundresses to their colonial master before they caught his eye. Young native women and older French men, the women unable to say no because of the power exchange.

In colonialism, native cultures lose their land and their resources to the more powerful nation. Their men lose the chance to earn their own living. People who had independent lives become dependent on a foreign system. Tradesmen become servants. Women become housekeepers and sex objects. Native traditions and languages bend, twist and often break or are forced broken by the more powerful, dominant presence.

So when we advertise a sophisticated, elegant French-Vietnamese fusion and give it a cutesy name, we are perpetuating the idea that the cultures on the peninsula between India and China did not have anything to contribute to the world before the French came along and subjugated them. 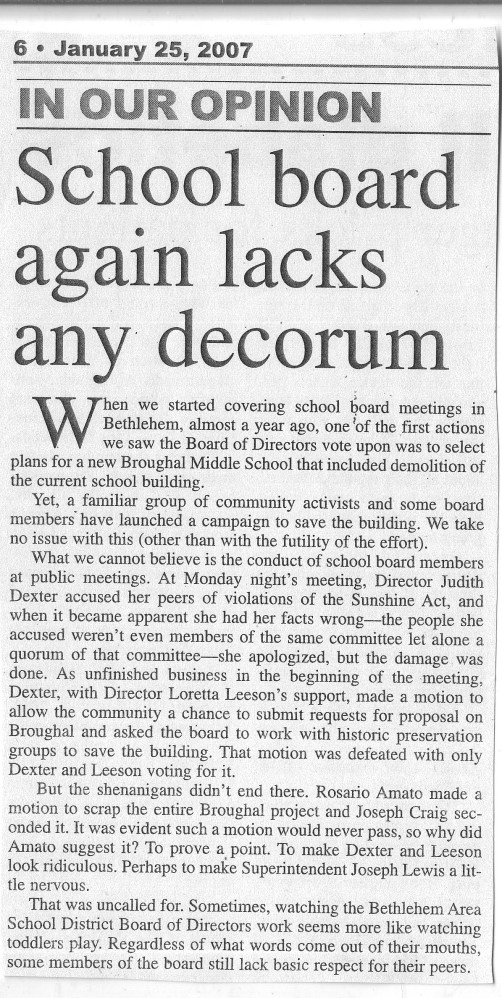 When we launched the Lehigh Valley News Group, the Lehigh Valley branch of Berks-Mont newspapers (a Journal Register entity), I served as managing editor for the five new newspapers and the one previous-existing, The Saucon News. In addition to managing editor duties, I served as editor of the largest of the new papers, The Bethlehem News. We headed into a territory that had been abandoned by my previous employer (Chronicle Newspapers, a division of The Morning Call, a Tribune Company newspaper). In addition to those Chronicle weeklies that had just closed, most of our proposed territories were also served by The Press weeklies, an entity that still continues today.

I attended the school board meetings of the Bethlehem Area School District. After more than five years of covering the Phillipsburg School District, the differences between the two boards fascinated me. Bethlehem was a larger school district, had more schools and more students. But let’s just say the people who sat on the two boards were also different. I’m sure everyone had their good intentions, but the interactions on the Bethlehem board were often tense.

I wrote this editorial after one board meeting where the disagreements between board members, and their unwillingness to move forward after a vote, scared not only me but also drained the color from the superintendent. 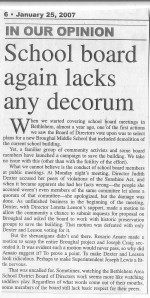