I once had a stranger walk up to me and ask if I felt out of place. She specifically asked me if I felt as if I were in the wrong time.

She continued to tell me that she saw an air of an earlier era about me, circa the 1950s, which struck me as odd because my specialty in my academic work was 20th Century colonial/post-colonial Francophone Africa.

I gravitate toward post-World War II history and have to feign interest in anything 19th Century or earlier (though I can handle specific topics like the Industrial Revolution and Early French secularism because of their direct impact on the areas I enjoy) and have equal distaste for things that happened during my lifetime.

I love movies based on real events, and the rise of cinema celebrating real people and their achievements (like First Man, for example) and even historical settings (like the Downton Abbey feature film) are likely to get me into the theater.

Ford v. Ferrari had been on my calendar since I saw the trailer months ago. 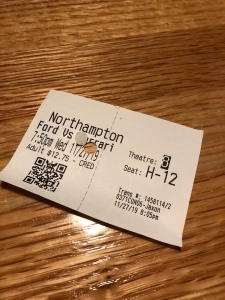 In addition to “liking” the mid-Twentieth Century and, of course, how can you not look at Ford v Ferrari and not see a nod to American Industrial Complex v European Artisan Mindset… I also really like cars.

I can recite most of the Nicolas Cage version of Gone in 60 Seconds. My initial thought when I say the Ford v Ferrari trailer was “oh, they made a biopic for Eleanor.”

So last night my teen daughter and I saw Ford v Ferrari. We laughed. She cried. She jumped from her seat at every spin the car made. And squealed with every race lap.

And it was also interesting to see Lehigh Valley native Lee Iococca represented on the big screen.

But I left the film with a sense of homesickness, or maybe heartsickness. Perhaps a piece of my soul belonged to someone perhaps my dad’s age, born in the late 40s or maybe 50s, and perhaps they died young. Maybe these yearnings I have for the past are desires to finish a life someone else didn’t have the chance to complete.

Maybe they died in a car accident… who knows?