Naked Pina Colada: I expected this to be very pineapple and very coconut, but the coconut comes from coconut milk. So that was a pleasant surprise. And it had a heavy banana flavor which made it refreshing.

Puffins Protein Berry Burst: This was like plain Kix and Berry Berry Kix but for grown-ups. Very nice indeed.

It’s certainly not pretty, but it tastes better than it looks. It looks like a pile of slip.

I bought this gluten free black bean spaghetti at Marshall’s. I don’t usually shop there as my soon to be ex-husband worked at Marshall’s and I didn’t approve of their practices as employers or their merchandise.

But I am always looking for trendy forms of protein.

I got inspired (I blame too many episodes of Gordon Ramsey’s Kitchen Nightmares) to make Asian-inspired glazed chicken meatballs with pineapple and the black bean pasta with a cheater method peanut sauce.

The sauce is an easy 30-minute meal starter, and vegan. See the recipe on my old cooking blog where I chronicled every meal for about seven years: Peanut Butter (Thai) Noodles

The chicken meatballs turned to mush in the pan. It’s my own fault as some of the ground chicken was still frozen. I don’t know why I thought I could work around that.

Flavor was fine, but texture was like scrambled eggs.

As for the pasta, I liked it. The teenager didn’t like the texture of it, but I did. If anything I would call it a tad sticky. The teen referred to it as gummy. 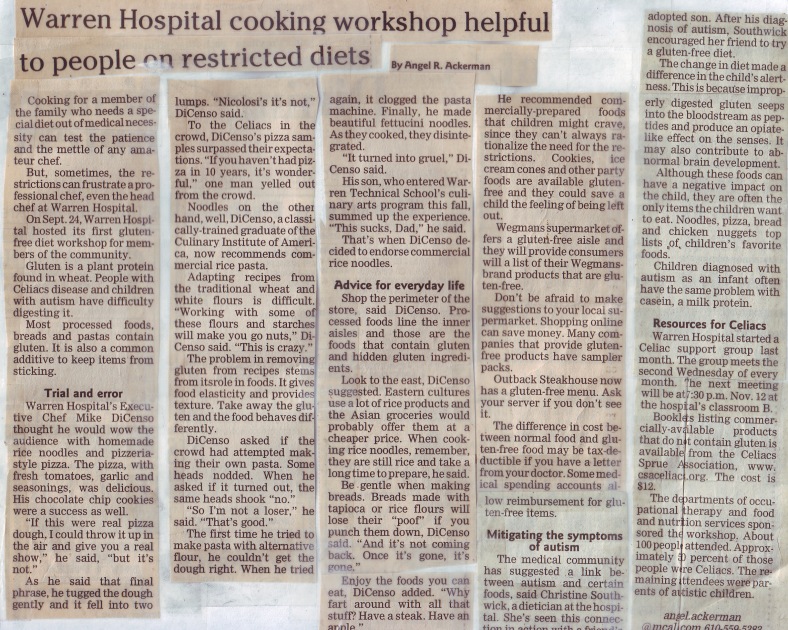 This article stemmed from a cooking workshop/presentation at Warren Hospital in Phillipsburg, N.J. It occurred almost ten years ago. The host was the executive chef of the hospital, Mike DiCenso. At the time, gluten-free cooking, Celiac disease, gluten intolerance and the connection between gluten and autism/sensory disorders was not quite as mainstream a conversation as it is now.

I pulled this article out of deep storage. The information in it remains pertinent, if not more relevant than it was a decade ago.