A few weeks ago Gayle and I proposed to the teenager going to Pocono Environmental Education Center (PEEC) www.peec.org for their waterfall tour.

The July date didn’t quite mesh with our schedules so we headed up today.

Gayle has some great stories from our day on her blog: “Fat Girl Walking” at PEEC

I don’t really have much to say other than:

Our tour guides had some interesting knowledge of the area; and our favorite had an eclectic post-college experience of accepting Americorps posts all over the country. She apparently had extraordinary prowess with a chain saw.

We learned a lot about plants, both native and invasive; trees and their insect diseases; and history— they even discussed how this area was shaped by the proposed Tock’s Island Dam project.

I find the Tock’s Island Dam controversy fascinating. Because the land was taken by eminent domain and not originally destined for National Park use, the people who had their homes seized did not have much time to move. So much debris was left behind but nothing can be removed from a National Park.

These high school students did a great job on this brief documentary explaining the project.

What is even more fascinating is that without the proposed Tock’s Island Dam, the Delaware Water Gap National Recreation Area would not exist as it does today and it wouldn’t be as expansive. Even one of the biggest anti-Tock’s dam activists says that the process of condemning those homes and entire towns for the dam protected the area from future development.

I grew up on the Delaware River. Much downstream from where we were today, at the start of the Delaware Water Gap National Recreation Area. So hearing about “Hurricane Diane,” “the (19)’55 flood,” etc., was like listening to legends about my own history, as if the river were my blood.

My bedroom faced the river, and when I find myself someone where I can hear water washing against the shore in the lazy way that river does, I close my eyes and can revisit some of the best memories of my childhood.

And of course no 65 minute road trip is complete without some sites on the road: 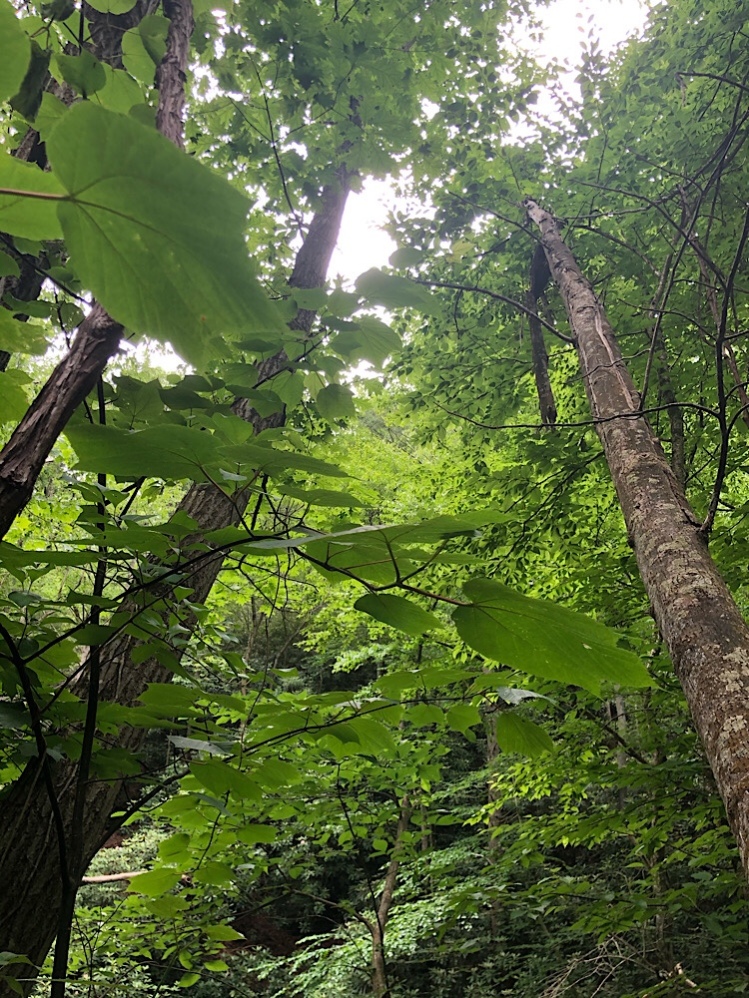 One of the women I went to school with took her kids to Slateford Creek Falls, a place about 5-6 miles from my childhood home. I have never been there. Her pictures left me captivated.

How could something so beautiful exist so close to my former home?

Gayle joined the teenager and I for a morning walk. We did a little web research— apparently not enough.

Gayle drove and I took her on a scenic detour to my childhood home between Tuscarora Inn and Driftstone Campground in Upper Mount Bethel Township.

We arrived at the main parking lot on National Park Drive in one of the first parks that make up Delaware Water Gap.

And we knew from our research that the falls weren’t by the main parking lot but we decided to follow the main trail anyway. Maybe we thought the falls would move just for us.

We were rewarded for our adventurous spirit by seeing two very large woodpeckers with vivid red heads.

Someone gave us helpful directions that the falls were across the street and by the “pull off” between the guard rails. I remembered seeing the pull off on the way in, and I was sure it wasn’t that far.

I was wrong. We followed the road, on foot, down the steep, windy road. And we almost made it, but we weren’t sure how far it was and wasn’t sure we could walk to the falls AND make it up the hill.

Gayle offered to get the car, which didn’t make much sense because Gayle doesn’t do well on hills. Her knees have aged faster than she has.

The teenager volunteered me to go get the car. I asked if she was coming too— she said no, that I would only slow her down. Apparently, the now-16-year-old can’t keep up with me on hills. And I have cerebral palsy!

So I hauled my butt up that hill, huffing and puffing. Gayle and The Teenager almost made it, too!

I didn’t move Gayle’s seat so I was sitting on the edge barely reaching the pedals and then I couldn’t get the doors to unlock but Gayle took over and saved the day.

And when we found the trail, it was intimidatingly vertical. I’ll let Gayle’s blog entry cover the specifics of the trail:

The teenager got to play in the falls, and Gayle and I didn’t end up on the wrong side of gravity although Gayle did bump her head on that tree.

It occurred to me— as the teenager and I gathered slate for future spiritual purposes, climbed among the rocks and fallen trees in the middle of the creek, and enjoyed the peace of the rumbling water—that this moment was full of freedom, nature and life giving resources.

The stats on this hike weren’t accurately counted. The teen got 4 miles, I got 2.5 and Gayle’s numbers were different from those. I got credit for 3 flights of stairs, Gayle got 14.

And perhaps it was no coincidence that I had received notice that I am losing my job with the full moon and “Independence Day” approaching.

With this in mind, I arrived home in time to meet up with our favorite little dog, Sobaka, who is hanging out with us while her “mom” is at a picnic.

Sobaka laid at my feet while I did some public relations work for upcoming events hosted by Aspire to Autonomy, Inc.

I am constantly blessed to work with such a wide range of people with different outlooks and different strengths. I learn something from everyone of them— admiring one person’s brilliance, another’s kind heart, and yet another’s passion and willingness for boots-on-the-ground work.

It’s a lot to think about.

Maybe I’ll get out my tarot cards tomorrow.