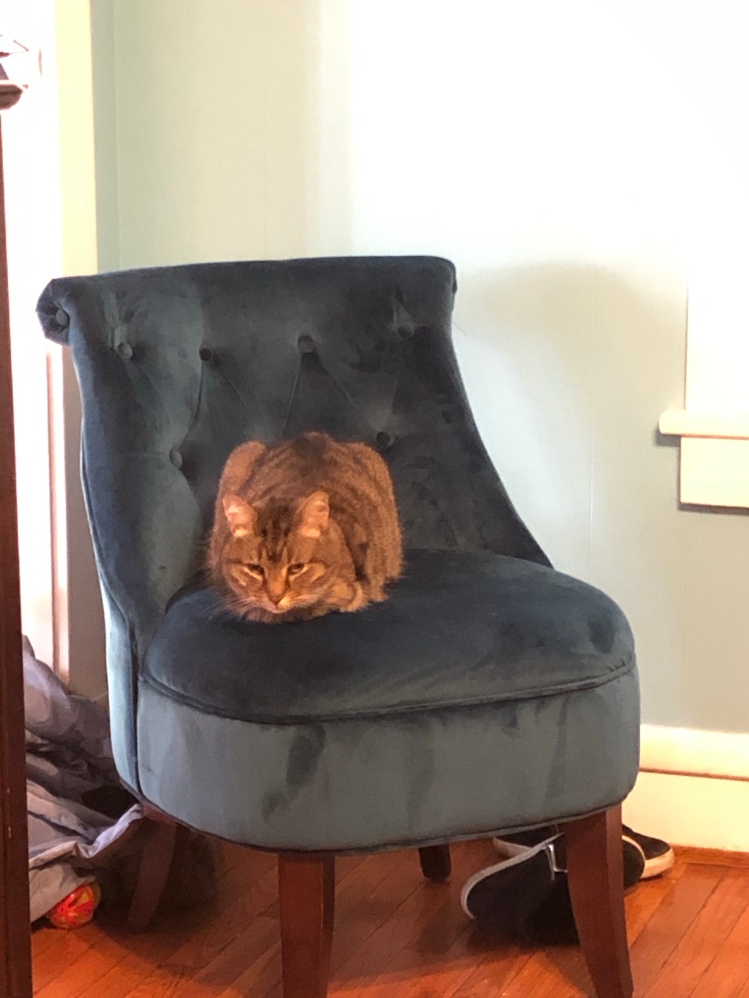 This morning I was feeding the cats and I was sitting with Opie as he ate his kibble. Both of our cats will be 9 this March, they aren’t related and we got Opie when he was about 9 months old.

We rescued Oz from the animal shelter as a three-month-old. He was a birthday gift to my daughter, who really wanted a dog but my husband said no. We researched other pets, but in the end her father reminded me that I was good with cats, we already had a cat, so a kitten would mean no new stuff.

Opie was the offspring of a feral cat rescued by friends of ours. Their cats terrorized him. Mine did not.

Opie is not cuddly. He took years to warm up to us and not be so aloof. He and Oz bonded, and even though Oz is bigger Opie was always dominate.

And neither one of the boys ever bothered my female cat, who was 12 years their senior and a force with which no one reckoned.

But when she passed away, Opie stepped into the role as my protector and house gargoyle.

Then last fall, Opie started limping. I didn’t think much of it, because he escapes from time to time and tends to disappear and I thought maybe he jumped from some unknown height or got into a tussle with some other animal. It came and went for months so I thought maybe arthritis. The vet thought maybe an old wound that hadn’t healed properly.

But then he started moping. He wouldn’t put the foot down at all. I spoke with a nurse at our veterinary practice and she recommended a different doctor there at the practice. Apparently the one I’d been seeing, or rather that Opie had seen, didn’t like cats.

The new vet xrayed Opie. The other had refused to X-ray him without sedating him. She warned me it looked like bone cancer in his joint, what would be the elbow in a person. This cancer, she also said, is rare in cats and when they get it, they usually get it in the rear paws.

When she called to confirm that he had the cancer, she also advised me to shop around as her practice was very expensive. I admire her honesty.

My daughter contacted No Kill Lehigh Valley and they found a vet who could do the surgery for less than half what our vet would charge.

This cat’s journey as an amputee also overlaps with my jump-starting my professional career after ten years in retail, and, in a way, hastened the end of my marriage as money had become more and more of an issue.

So, Opie is a warrior. And I suppose a symbol.

Life as a tripod

Opie came through his surgery like a champ. He recovered curled in a ball on my electric blanket on my bed, watching the budgies and probably plotting for when he felt better.

I could tell his pain had dissipated and he was feeling aggravated that he had to wear a cone and we were dragging him.

But this post is about Opie as an amputee and a kitty cat survivor. This is what I have noticed:

And yes, Oz is on my lap and I am wearing footy pajamas.