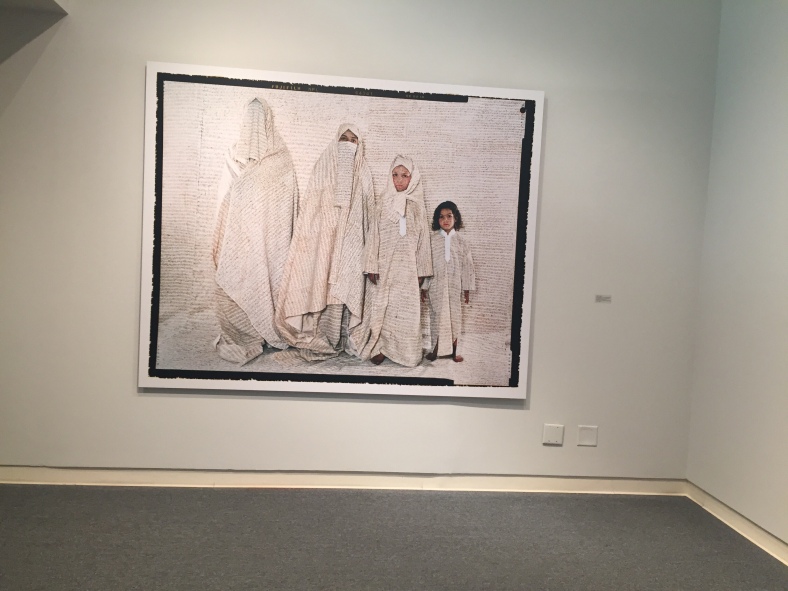 This is the final week to see Lalla Essaydi’s photographs at the Williams Center for the Arts gallery at Lafayette College.

Immediately, I recognized these themes in Essaydi’s photography. My previous exposure both academically (my interest in post colonial Francophone Africa, how it intersects with the Muslim world, and the impact these topics have on contemporary international politics) and via travel in Africa and the Middle East came rushing into my head like a lost dream you fight to remember upon waking. 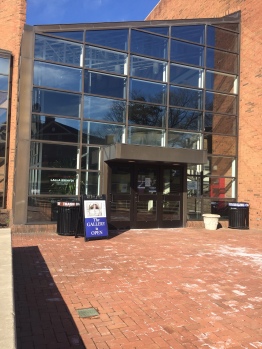 The seven photographs come from three different series: Converging Territories, Harem and Bullets. Just reading those titles should leave a certain taste in the mouth. I have with me an exhibit guide but I haven’t referred to it yet as I prefer to digest the works on my own first.

The first piece one encounters in the exhibit is 2004’s Converging Territories #24, featuring a woman’s face, only eyes showing, with writing on her face and the cloth covering her. The chromogenic print mounted on aluminum divides the woman’s face into four panels, each an almost even display of skin, lettering, and beige fabric.

This one did not attract or impress me. That is not to say it does not present a strong harmonious image. It is certainly a lovely piece of artwork, but artwork often speaks to the viewer in unique ways and this one seemed what one would expect from an exhibit like this.

Next came Harem #2 (2009). Instantly, I noticed the use of the term harem and the mimicry of traditional Orientalist images prevalent in I believe it was 19th century Western paintings capturing a fantasy of what Western/European artists expected the Muslim/Arab lifestyle to be.

The Harem series uses more color, more texture, and repeats the Orientalist themes of a reclining woman in exotic dress. The repetition of these stereotypical themes used by a Muslim female photography made me bristle. But this woman is propped on one arm and seated rather proudly so I sense the challenge to the age-old idea of the Middle Eastern harem.

Next, I found Bullets #3 (2003). The woman  in this photograph has a sassy shoulder turned to the camera. She is covered, but showing more flesh than normally proper throughout the arm. The backdrop is all bullets as if they were tiles on the wall, bullets also adorn her clothes. Another stunning photograph, but frankly I grow tired of the constant obsession of the Muslim identity automatically connecting with terrorism. I’m sure that’s Essaydi’s point, too.

I’m going to skip my favorite piece and turn instead to Harem Revisited #34 (2012). Perhaps this is the most colorful piece presented at Lafayette. It is three years newer than the other, and the woman’s pose in this one is not only more docile and reclined but divided into three panels, an immediate detraction from her humanity. She is reduced to pieces.

But the focal point of the exhibit (and my favorite), if I can proclaim that based on not only the fact that it was in my opinion very prominently displayed, is Converging Territories #30 (2004). [Featured image for this post.] It depicts, with the same beige clothing on beige background covered with writing and people decorated with henna, four females standing side by side in various levels of garb.

The largest woman, whom appears to be the only adult in the group, is completely covered head to toe. I can’t even refer to it as burqa as she doesn’t even have a slit or a screen for her eyes. I see them as a family, and the next one is in more traditional burqa and appears to be an adolescent. The next girl, a sweet looking pre-teen, has her scarf tied under her chin, exposing her whole face but not her hair. The last little girl has no head covering.

What I adore about this photograph is the vivid use of the progression of covering as it follows a woman through various stages of life and suggests not only the typical message of how a woman’s identity is limited by strict forms of covering, but also attaches this idea to the act of mothering and potentially makes it more universal. To me, the suggestion is that all women lose a part of their identity as they transition into a maternal role. This has nothing to do with religion.

If you miss the exhibit at Lafayette, a similar exhibit runs through May at the Trout Gallery of Dickinson College. 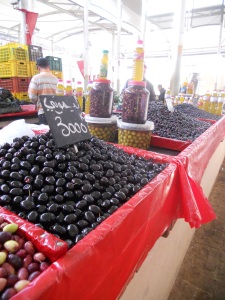 Olives at the market in Tunis

We spent days meandering the streets of Tunis. We hopped trains to Sousse and Carthage. We celebrated with the locals on the one year anniversary of the departure of Ben Ali. Olives factored into our lives there with every meal, served in a big bowl beside the olive oil, harissa and bread. A perfect complement to the spicy tomato-based, lamb sausage soup that I can still taste today.

We found the market the day before we left. We could see it from our balcony at the hotel, but we never quite realized what sat under that massive building always boisterous from the first light. That’s where I snapped this photo of olives, in all their rich varieties.

Every time I taste a good olive, a real olive, not one that’s been industrialized and reduced to life in a can, I return to Tunisia. 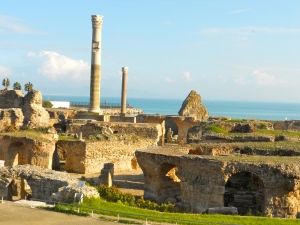 My initial impressions of Tunisia 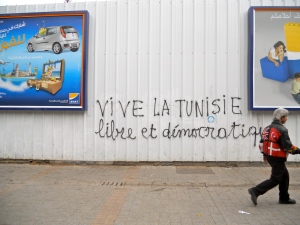