I normally don’t enjoy street fairs and community celebrations unless they have a theme that interests me. Carnivals and municipal anniversaries don’t do it for me.

I love the history of Easton’s Heritage Day, especially since I am a history nerd.

My daughter works downtown for Book and Puppet Company, a fun bookstore and let’s just say she helps with “character visits.”

I had also heard that the Grave Cellar at Saint John’s Lutheran Church would be open, so that was enough to entice me out of my anti-Street fair attitude.

Parking at meters would be free for the day or $5 (cash only) at the garage. I found a spot very close to the book store.

And my daughter mocked me for asking the police officer if there was a geographic boundary on the free parking. My use of geographic apparently highlights my nerdness.

The Grave Cellar and Parsons-Taylor House

When St. John’s Church expanded quite some years ago, they moved the graveyard to another local cemetery but some of the graves still exist under the church. Not as creepy as the Paris Catacombs but pretty unusual.

From there we went to the tiny Parsons-Taylor house. George Taylor, one of the signers of the Declaration of Independence, lived and died there.

My daughter looked in great detail at the craftsmanship of the house and furniture.

And the grazing begins…

We started exploring nearby shops, and we felt a little hungry but didn’t want to eat until we’d seen all the offerings so we shared a slice of buffalo chicken pizza from a new restaurant in town. Then we shared a lavender lemonade from Green Marketplace.

Then we looked at classic cars and city construction equipment and I got a hard hat. 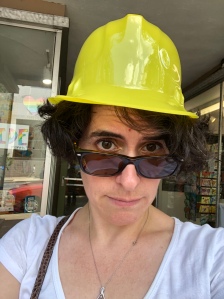 We also saw how the wind twine into sisal braided rope.

Then we meandered down another street and watched some of the kiddie activities and I found the Oscar Mayer Weinermobile. I was very excited.

And then I saw a sign that a local church was hosting a blood drive. So I registered. The last time I tried to donate blood was 25 years ago, and can you believe they had my address on file from that time period? I didn’t give then because my blood pressure was too high.

I haven’t given since then because tattoos, piercings, anemia and travels to exotic third world countries.

But I’m O-negative when it comes to blood type so I should give. And I did. For the first time.

Then we went to my daughter’s “office” and Paddington Bear came to visit.

After work, an artist drew her and she bought a vintage Monarch train case at Salvage Goods.

We also explored the dollar store on the circle. That might have been the only disappointment of the day.

And the teen had some bacon nachos from Porter’s Pub and I had one chicken and one steak taco from the restaurant at 645 Northampton Street that has really good food.

Our last stop was Easton Public Market again for a watermelon lime slush from Modern Crumb.